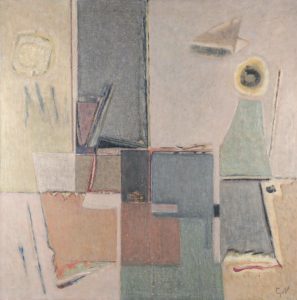 Biographical references
The Dutch artists Geer van Velde (1898-1977) and his brother Bram first learned the profession of painter decorator, but very soon they were convinced that their true vocation was to become artists.
In 1925, the two brothers settled in Paris and started life as bohemian and penniless artists.
In 1937, Geer van Velde befriended Samuel Beckett, who got him a first exhibition at Peggy Guggenheim’s brand-new London gallery.
Geer van Velde and his wife moved to Cagnes-sur-Mer, with a view of the Mediterranean, in the summer of 1938. During the six years spent in this village, he developed the elements of his future work with an increasingly abstract formal vocabulary. He organized his composition of space and light according to rules that became clearer, step by step.
In 1944, Van Velde returned to Paris and settled in Cachan where he remained until his death in 1977. The theme of workshops became the essential subject of his work, a new source of inspiration, a new light. It is the place par excellence of the painter’s intimacy with his creation.
From 1946 until 1952, Geer van Velde was presented at the Maeght Gallery.

A selection of exhibitions

Six oils on canvas
In the oil, ‘Intérieur – Extérieur’, circa 1955, the abstraction is almost complete, schematized to the extreme.
Verticality, rhythms and refined tones are all present.
In this musical score, he reconstructed the studio with its light and its shadows.
The representation of the workshop is decomposed and recomposed in a cross construction. The painting itself became its own subject.
Subtle differences in light tones divide the background into luminous rectangles on which shapes and colors, lines and textures are placed.
A slight movement and a sensitive balance animate this ensemble.
Pierre François Moget, specialist of this artist, says: “In this colorful composition, Geer van Velde now only retains from reality the lived experience of light and space”. 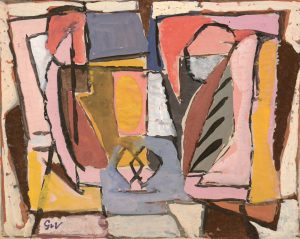 Following one or two sketches in pencil, Geer van Velde chose the most satisfactory to set in color with gouache, watercolors, or pastels. Until the end of the forties, this work with gouache was therefore a form of “preliminary project” for him whose purpose was to result in a unique oil on canvas in an already anticipated format.
The preliminary project on paper was then faithfully reproduced and enlarged on canvas using a grid and the colors replicated. Gouache works and drawings which were not used for this purpose were not overlooked but carefully stored in piles on the work tables to serve as a reminder for future studies.
Towards the beginning of the 50s, the grid system of reproduction disappeared and was replaced by “composition” which was learned and integrated after several studies on paper on the same subject. Gouache is no longer just a preliminary project but becomes a form of mental exercise allowing Geer a direct charcoal transposition of the motif on the canvas. The template is now only on the table as a guide, a reminder of the initial project.
This first oil on canvas was often only a small or medium format transcription step that was followed by a large “definitive” format.
However, the process was not set, and a large format gouache could, for example, replace the expected small oil or research gouaches could be interspersed between two oils on canvas.
Geer van Velde’s creative freedom was total, time (chronos) was abolished. The goal was as he said: “to find the form”, the colors, the light and the space between the shapes.
It is therefore in these multiple increasingly abstract and spatial studies that Geer van Velde created the subject of his paintings by freeing himself from composition.
On canvas, the question is only pictorial.
The gouaches presented by the Galerie de la Présidence bear witness to his intense creative moments and their evolution from 1937 to 1963.

About the gallery
Located opposite the Elysée Palace, Galerie de la Présidence was founded in 1971 by Françoise Chibret-Plaussu who is now working in collaboration with her daughter Florence. A selection of Masters of 20th Century is on permanent display. Included are Boudin, Cross, Derain, Dubuffet, R. Dufy, Gleizes, Gromaire, Guillaumin, Marquet, Signac, Vlaminck and Vuillard. Françoise Chibret-Plaussu has realized the Catalogue raisonné of Marcel Gromaire’s oils (published in 1993) and the gallery is currently preparing the Catalogue raisonné of his watercolors. Galerie de la Présidence regularly organizes exhibitions and retrospectives. Examples over the past 20 years include Giacometti & Gruber, Albert Marquet, Maurice de Vlaminck, Paul Signac, H.E. Cross or even Marcel Gromaire with more than 50 works exhibited each time accompanied by a descriptive catalogue. The gallery participates in several art fairs: BRAFA, TEFAF, Salon du dessin and Fine Arts Paris.

Note for the editor