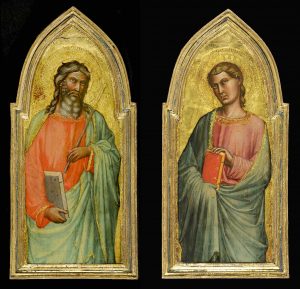 Amsterdam, 12 April 2021 – The Morsink Icon Gallery and Erik Bijzet Sculpture and Works of Art have joined forces to show fifteen important early Italian objects in the Netherlands. The exhibition on the Keizersgracht in Amsterdam will feature rare objects from the Middle Ages and early Renaissance. Highlights include a rare Gothic diptych panel with verre eglomisé from the famous collection of Baron Heinrich Thyssen-Bornemisza, a silver betrothal belt from fifteenth-century Milan, two fine altar panels painted by Martino di Bartolomeo and a panel with Saint Catherine of Siena by Matteo di Giovanni.

The surprising exhibition diametrically opposes the recent tendency in the Netherlands to show more and more modern and contemporary art in galleries. “We would like to illustrate the opulence and forcefulness of this early Italian art”, says Erik Bijzet. “This period was formative for the development of art in all of Europe in the following centuries, it is fascinating.”

Passion for early Italian art
The highlight of the Dutch passion for early Italian art was the 1934 exhibition in the Stedelijk Museum in Amsterdam. A group of 110 prominent Dutch private collectors and dealers displayed 1300 (!) objects, including paintings and sculpture by the foremost Italian masters. No less than 21.000 visitors flocked to see this display of treasures out of love for the great art of the Italian Middle Ages and Renaissance but they were equally curious to see the grandiose objects that decorated the grand houses in the Golden Bend of the Herengracht and the neighborhood around the Museumplein. Since then, the Dutch passion for collecting the art of Italy was rarely celebrated publicly here.

Simon Morsink and Erik Bijzet would like to stimulate interest in early Italian art in the Netherlands with their extraordinary exhibition. “It may clash with the current trend, but that makes it all the more interesting!”, according to Morsink. 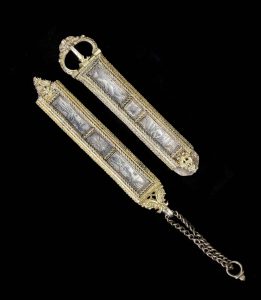 Buckle and tongue from a marriage belt
Milan, second half 15th century. Marked with a watermill. Gilt silver, mounted with nielli. Buckle: 13.8 cm; tongue: 14.6 cm. This exceedingly rare work of secular Renaissance silversmithing is an important addition to a small group of fine belt fittings made in Milan in the 2nd half of the 15th century. Only six similar belts are recorded: two from cathedral tombs in the Museo Civico of Novara, and single examples in the Museo Civico in Turin, the Museo Poldi Pezzoli in Milan, the Louvre, and the British Museum. The fittings from the group are of slender rectangular shape with floral terminals and either filigree decoration or, like here, robust silver borders intricately decorated with twisted wire and rows of engraved and punched patterns. Small nielli or enamels are mounted in apertures along the fittings and generally represent symbols of love and heraldry, as well as profile portraits. The presence of similar belts in contemporary painted portraits, the Sforza archives, and a letter from 1451 that records Marco Parenti’s commission for such a belt show that these rare belts were intended as precious personalised gifts. They were exchanged by the Renaissance elite to commemorate both friendships and betrothals. 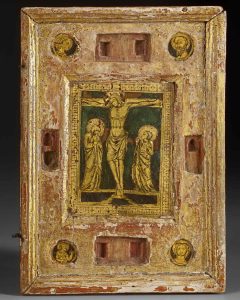 Right panel of a reliquary diptych with the Crucifixion and saints
Probably Siena, circa 1370–1390. Gilt wood with pastiglia decoration, set with five verres églomisées, 22.1 x 15.7 cm. Not since the Detroit Institute of Arts acquired its reliquary diptych wing in 1994 has Gothic verre églomisé of this caliber come to the market. Part of the famous collection of the Barons Thyssen-Bornemisza since the 1920s, the panel has not been seen in public for decades. It has appeared in several publications that have attempted to locate these exceedingly fragile and therefore rare works of art. The present diptych wing is distinguished by the captivating free and graphical manner with which the gilding on the glass has been incised. This particular quality of the draughtsmanship establishes a hitherto unexplored relationship with a series of verre églomisé roundels set in the frame of The Virgin and Child by the Sienese painter Paolo di Giovanni Fe (active 1369-1411) from the 1370s in the Metropolitan Museum of Art and a gilt glass pane with Christ as the Man of Sorrows attributed to a Florentine artist working around 1400 in the same museum, suggesting that this panel stems from that great center of Italian artistic production: Tuscany.

Saint Andrew and Saint John by Martino di Bartolomeo, Siena (1370-1434)
Tempera and gold leaf on panel. Saint Andrew: 58.2 x 27.6 x 3 cm. Saint John: 58 x 27.8 x 2.9 cm
At the beginning of his career, the important Sienese artist Martino di Bartolomeo travelled to various Italian cities, such as Florence and Pisa, like his teacher Taddeo di Bartolo. There he gained fame and posterity. As such, upon his return to Siena in the 1410’s, he received large commissions from civic and clerical institutions. The two finely painted panels date from this period. They are without doubt from the same altarpiece, of which two more panels, depicting St Bartholomew and St James have been identified.